Fly direct to Amsterdam from Southampton Airport with KLM and check out this beautiful city year-round. Amsterdam is an effortlessly cool city and is bursting with cultural riches. From historic museums, artistic marvels and century-old canal houses, this destination has something for everyone. But it gets better. The famous waterways, skinny gabled houses, fascinating museums, rushing bicycles, and unique neighborhoods are all a short flight from Southampton Airport.

From mixing with the locals at Amsterdam-Noord to visiting world-famous galleries and museums; here are our favorite things to do in Amsterdam — the bike-friendly city built on 11,000,000 stilts. 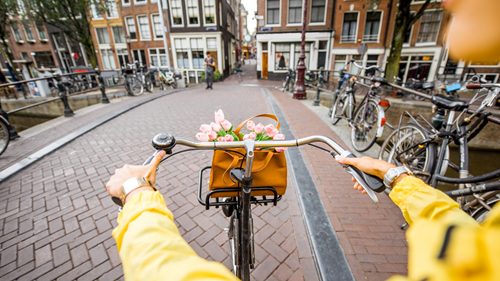 Amsterdammers are serious about cycling. According to I amsterdam, there are 881,000 bicycles there. Over 2 million kilometers are ridden by residents and visitors every single day, whilst a whopping €120 million will be invested in the area’s infrastructure by 2020.

Why not make the most of 767 km of cycles lanes? They go all over, hugging the three main canals — the 17th century Herengracht, Prinsengracht, and Keizersgracht. There are 165 canals in total, crossed by 1,550 bridges. So hop onto two wheels and go on an adventure, stopping off for coffee or something stronger along the way. 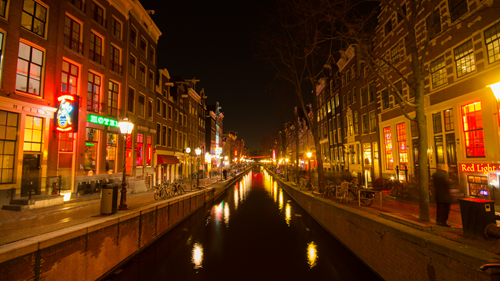 Amsterdam first-timers should pay a visit to De Wallen; the infamous Red Light District located in the medieval centre. It’s known for its bright neon lights fronting “coffee shops” and the red lights of legal brothels where sex workers are publically on show. You’ll find the area just a short walk from Centraal Station. You’ll know you’ve arrived, when you find hordes of tourists wandering slowly to take in this weird and wonderful corner of Europe.

If you’ve visited Amsterdam on a number of occasions, or are looking for something more family-friendly, you might choose to go elsewhere. Try the cool De Pijp, with its boutique stores, Middle Eastern eateries, and laid-back cafes. Want to escape the city altogether? Head to Vondelpark, Westerpark, Rembrandt Park, or Sarphatipark (in De Pijp) for a quick getaway — just relax on the grass in tranquility and do a little people watching. 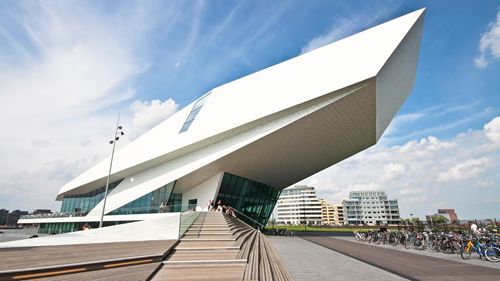 There’s a wide body of water behind Centraal Station. On the other side is Amsterdam Nord; reachable via a free passenger ferry (travel on foot or with your bike in tow). Spend some time on the grass near Tolhuistuin and enjoy a beer. Perhaps look at the listings and watch a concert in the modernist building that’s at the core of this recently regenerated and relatively tourist-free area.

If you’re a film buff, the EYEfilmuseum has a huge collection of iconic films and posters. Once you’ve finished there you could head up A’DAM tower for a breathtaking view of Amsterdam and its canals beneath. Adventurous travellers might want to cycle north towards Twiske, a nature reserve and recreational area a few miles away. It has an inland beach that’s perfect in summertime for cooling down away from the heat of the city. 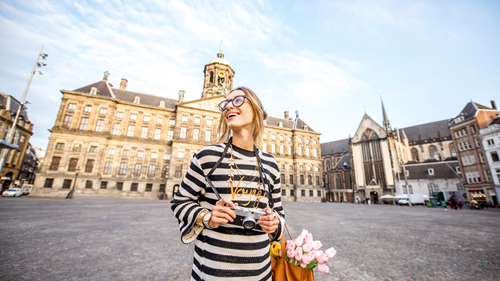 One of the most popular attractions is Oude Kerk. Founded circa 1213, the church is the oldest building in the city. The Rijksmuseum, the Dutch National Museum, or the Van Gough and Stedelijk Museums are also ideal if you have a morning or afternoon to spare. Anne Frank House is an interesting portal into the city’s wartime history, whilst Rembrandt House, where the painter worked and lived, provides a fascinating look into his life in 17th century Amsterdam. 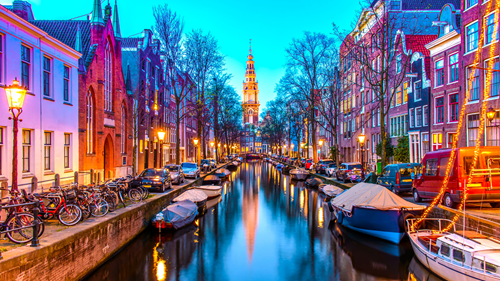 Take a Cruise and Explore 31 miles of Canal

No visit to Amsterdam is complete without a cruise along the picturesque canals. There are different boat trip options — from one-hour jaunts and hop-on, hop-off services, to wine and dine day- or night-time cruises. Decide what’s best for you and cruise along the UNESCO heritage waterways. Once you take to the water, you’ll witness the magical heritage of a liberal city that attracts over 15 million visitors a year.

According to KLM’s website “The central area of Amsterdam is fairly compact and easy to get around on foot. The GVB public transport office at Central Station has route maps and a guide to the ticketing system, which is based on zones, with the same ticket valid on trams, buses and metros. After midnight, night buses run from Central Station to most parts of the city. Taxis are among the most expensive in Europe and renting a car is not recommended. Streets in the city centre are narrow and awkward to navigate, and parking is limited and expensive. The ideal way to get around is by bicycle. Visitors will find several rental agencies around town.”

You will need two-pin round European plugs for your trip. You can pick these up in our WHSmiths store. (Please note - some of our retail units are closed due to COVID19, please view our dedicated page for updates)

The Euro is the official currency of Amsterdam. All major credit cards are widely accepted. ATMs are widely distributed and most are open 24 hours a day. You can pre-order currency from Travelex and pick it up when you arrive at Southampton Airport. (Please note - some of our retail units are closed due to COVID19, please view our dedicated page for updates)

The international access code for the Netherlands is +31. Free wifi is widely available at most restaurants, bars and hotels. As international roaming costs can be high, purchasing a local prepaid SIM card can be a cheaper option.

Amsterdam Airport Schiphol has great transport links to Amsterdam and the rest of the Netherlands. You can easily take the train, catch a bus, rent a car or have someone collect you. The airport railway station is located beneath Schiphol Plaza and trains depart for central Amsterdam and other destinations around the Netherlands regularly.  If you’re heading to Amsterdam, it is recommended that you buy an Amsterdam Travel Ticket.

Want to know your best public transport route? Plan your journey at 9292.nl.

Alternatively, use our easy booking system below to prebook your taxi in Amsterdam.